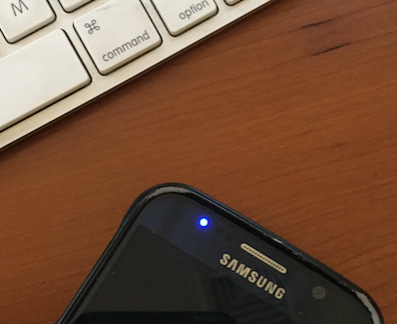 Sometimes the smallest things remind you of where you’ve been, where you are, and where you’re going.

My phone has a light that flashes different colors based on what kind of alert I’m getting.  Blue for most things, including text messages.  Green for certain alerts, including Facebook.  Yellow for notifications from different apps.  Red for a charging battery.   With one quick glance I know what kind of message I’m getting and whether or not I have to respond, without even seeing what it is.

It’s a rainy Sunday and before I left for my weekly visit with my father, I reached out to 2 friends whose situations I know all too well.  One lost her mother 10 days ago after an unexpected and fast decline.  She is in the part of mourning a parent where you just start to feel like you actually someday might feel like yourself again.  You do a workout, take a trip to the mall, laugh with your kids at a TV show to gain a small shred of normalcy.   Through your grief you look up and can see the surface of the water; while you are happy you can see it, it is so far away.  I didn’t have her phone number, so I messaged her on Facebook.  A green light if she responds.

Then I texted another friend who is at the start of moving a recalcitrant and  newly compromised parent to Massachusetts from an unsold house in another state.  She is in the part of becoming a caregiver where you are just trying to survive it.  You haven’t had time yet to consider how much a part of the Sandwich Generation you are about to become, or that your reward for surviving the upcoming months of sprinting will be years of trudging ahead.  You don’t have the time or inclination to look for the surface of the water.  You are just trying to get boxes unpacked and keep your newly fragile parent from falling apart from the shock.  A blue light if she responds.

On my way, I found myself at a red light, and looked down at my phone.  Flashing blue.  I disappeared in my head to a moment in 2013 just after my father had moved here.  It is late on a fall Sunday afternoon and I am over at a friend’s house after dropping something off.  He, his wife, and another couple – the same woman who is turning my phone’s light a flashing blue – are into their second bottle of cabernet laughing around the kitchen table  about the previous night’s party.  I feel a wave of isolation and jealousy wash over me as I instead am rushing over to my father’s place to deal with the latest disaster brought on by his never-ceasing C Diff attacks.  They are preoccupied in their conversation and it hits me that I live in a different world from them, and that I can never go back.

I arrived at my father’s, unplugged my phone from the car charger.  Flashing green.   Now I am thinking about the cabinet full of the COPD medication my mother didn’t take.  She never exercised, continued to sneak cigarettes for years after her quadruple bypass, drank endless cups of coffee to get up and swallowed valium to take the edge off.  She too had a fast decline and I can’t help but wonder if it didn’t need to be so fast.

Blue.  My uncooperative and cantankerous father is exiled from his post-hospital rehab center, so I have to scramble to move him back into the house long enough for my brother moves to move him to Massachusetts.  Green.  I completely fall apart when I see my kids for the first time after she’s gone.  Blue.  My brother has only 72 hours to extract my father from our childhood home and reduce lifetimes of memories into what he can fit into a moving van.  Green.  I climb into my car a week after my mother has passed away and try to muster the strength to drive back home to Boston from New Jersey.  I don’t know if I can do it but I know I have to try.

Blue.  My father is happy, healthy, and thriving at 92.  Green.  My mother escaped a long, slow decline, and my daughters have only sweet memories of her.  Where I am today is very different from where I was.  I am grateful.

Earlier this week I saw flashing lights of a different color in front of the house next door:  red ones from a fire truck.  They are coming more and more these days as my neighbor has given up her battle with brain cancer that she is about to lose.  I have been blessed as my father has beaten one life-threatening condition after another.  They remind me though that someday, somehow, his luck is going to run out, and with it, mine.

Sometimes the smallest things remind you of where you’ve been, where you are, and where you’re going.