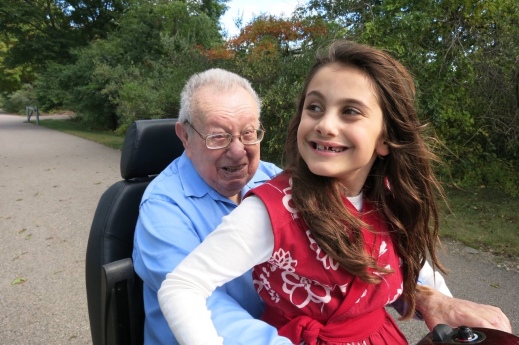 There’s an old cliché that a picture is worth a thousand words.  Often, clichés become that because they are true.

My brother texted me a picture from 2 years ago (it’s the one that’s part of this post).  To anyone else, it would look like a pretty standard picture of a smiling grandfather with his granddaughter.  That’s because it is.  And yet –

I remember finding that apartment for my father, way back in 2013, and being happy that his community abutted a park.  That’s the park they are riding in.

I remember what it took to keep him going when he got sick before that so that he would fight to stay alive and live to reach that moment at all.

I remember buying that scooter for him.  I don’t love that memory; truth be told, it was kind of a nightmare.  Not just because the process of selecting, ordering, assembling, re-assembling and then figuring out how to make the battery work was grueling.  To say that I am not mechanically inclined is the understatement of the century.  The other difficulty was that I resisted buying that thing, and then it turned out to be a great purchase for him.  It bought him a year of mobility and happiness.  He was right, I was wrong, and I didn’t like it.

I remember buying that blue, button-down, collared shirt for him at Target, along with other clothes he had requested.  He insisted on Target; actually, that’s a lie.  He insisted on Wal-Mart and I’m enough of a snob that I went to Target to instead.

I remember that he had wanted to lose weight.  You can see that his face is pretty found for a 92 year old man.  But by that age, it’s more important to put weight on; you never know when you are going to need those extra 15 pounds to stave off the effects of laying for a month in a hospital bed that you didn’t expect.  His weakness for unhealthy food kept him alive many times, it turns out.

I remember that 2 years ago, my brother and family came out for the Jewish holidays.  Normally, they come for Thanksgiving, but that is an expensive and grueling proposition.  So in 2016, they came for Rosh Hashanah instead.  It was in early October, which is late for “the Rosh”.   I sat with my brother one night and drank bourbon by the firepit in my backyard.  It was a great moment.  Everyone should have a brother – seriously, I highly recommend it.

I remember that about 10 days later, on Yom Kippur, my father fell and broke his hip.  We still had good moments after that, but that was the beginning of the end.  He recovered from the broken hip.  He was determined that it wasn’t going to kill him, and my brother and I were determined not to let it.  The true harbinger was the stroke that had caused him to temporarily lose consciousness and fall, the one that had set the end in motion, the one that preceded all the others that would come that we didn’t know about.  They were small and he was strong.  Eventually they were stronger than he was.  Whatever the “they”, they always are.

Mostly, what I remember, what this picture brings up for me, and for my brother, is that we worked really hard to make him happy, and succeeded.  There have many times since he passed away that I have thought that I worked too hard at this.  He was conditioned to demand this kind of attention, and I was conditioned to give it.  I suppose that because he raised me, this is only natural.  I can observe it more dispassionately now than back when at times I felt it was destiny to help him make a life, to put him in a position to zip around on his scooter in the park on a lovely early fall day near his apartment with his granddaughter.   It was, and it wasn’t.  I am still trying to figure that part out.

By the way – I wasn’t quite right.  A picture sometimes is worth exactly 695 words.