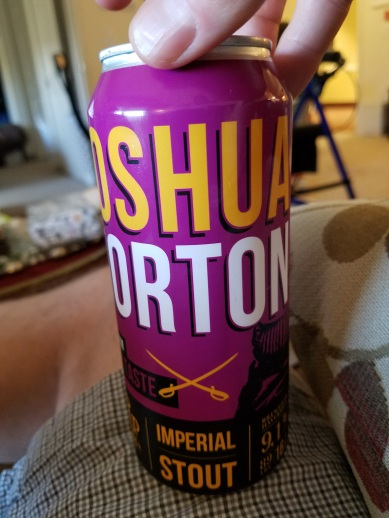 Some time ago, I mentioned that in the catalog of stuff in my dad’s apartment, I almost always keep beer in the refrigerator.  Specifically, Smoke and Dagger black lager from Jack’s Abby brewery in Framingham.  Sweet, smoky, not too heavy, drinkable if you need more than one – which as a caregiver, sometimes you go.  This was back last August before my dad broke his hip, therefore keeping me away from his apartment for a few months.

So when he moved back home in December and I resumed regular visits in January, I resumed the habit until I ran out.  I didn’t buy more – truth is, I felt guilty that my visits would seem like something that necessitated taking the edge off.  I once had an aunt who was challenging to deal with, and I occasionally would buy her Absolut vodka with which she would then make cocktails for me during my dinner visits.  I don’t even really like vodka but with her, it helped a lot.  We all have relatives like this.

A few weeks ago, my father noticed that I wasn’t having a beer at his place anymore.  “Why,” he asked me.  I told him that I didn’t really want to keep beer there and that it was fine.  Yet another example of my not exactly being true to what I wanted or needed — more on this from my post about my visit to New York with my daughter Sophie.

So, unexpectedly, he stops and tells me that he wants me to enjoy coming to visit him, and that he likes that I relax and have a beer while talking with him.  You should keep beer here, he said.  I insist.  I want you to look forward to coming to see me.

He doesn’t really drink at all, so this surprised me.  And it surprised me for another reason.  Sometimes as a caregiver you look for any scrap of any appreciation of not only what you are doing, but even just that you are there.  Once upon a time, just their being there was all you hoped for, and it is strange and wonderful when it happens to you.

My beer of choice now is the Joshua Norton Imperial Stout – Untapped review here.  I sit on the couch and sip one while we watch a movie together.  Lately we have watched Ninotchka.  Twice – I think he forgot that we had seen it already.

One of my favorite things, maybe my favorite thing, is to hang out with a friend and have a beer and just be.  He and I never had this before I became a sandwich generation man.  Don’t care.  We do it now, and beer never tasted so good.